Today marks the end of my 38th week of pregnancy. And I’m still pregnant. I view this as a good thing because that means the baby listened to our pleas to hang in there until her “Farmor” (literally “Father’s Mother” in Swedish) arrived on Wednesday night.

So what to do when you’re 38 weeks pregnant, move slower than molasses and feel like the baby could drop any day? Why, put your hair up in the most Swedish hairstyle you can  think of and wrangle everyone into performing and teaching a Swedish praise chorus during a Saturday afternoon concert at church, of course! With a watermelon ukulele. Of course. 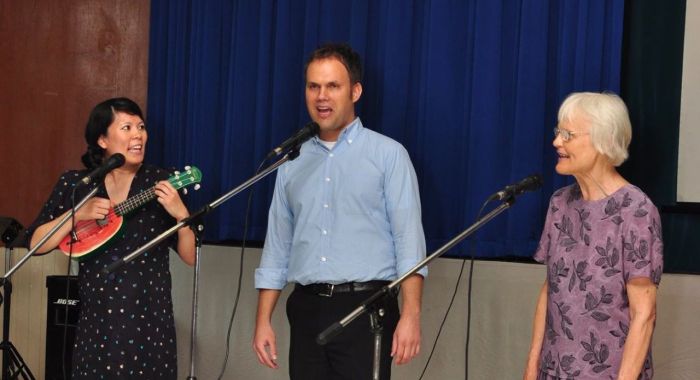 Three generations of Karlmans on a stage, singing in Swedish? How could I resist? (Photo by Damien Sim via Facebook)

Here are my notes as I attempted to learn the song and what it actually sounded like to me:

Swedish is hard, yo.

Turns out this was also the week to try new fruits. We spotted this one in our local Tesco Lotus supermarket. It was labelled as “passionfruit.” Bjorn’s mom pointed out it didn’t look like a typical passionfruit, but hey, this is Thailand, so you never know. 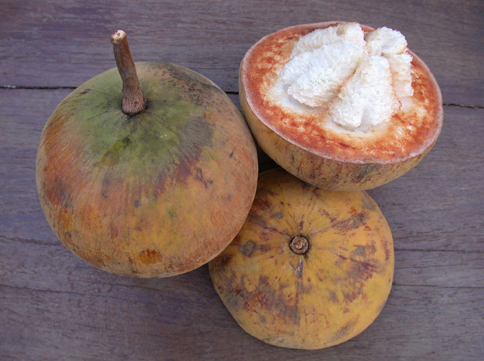 This is NOT passionfruit. (Photo via dokmaidogma.wordpress.com)

As soon as we cut one open, we knew something was afoot. I remembered seeing another word on the label: “Santol.” Turns out this fruit is also known as the cottonfruit. We cut it in half and scooped out the flesh with spoons, but it was rather hard-going, and it stuck to the seeds no matter how much you chewed it. (We’re guessing the name “cottonfruit” stems from the fact that the whitish flesh turn into a rather pulpy, fibrous mass the more you chew it.) It was both sweet and sour, with more emphasis on the sour, and had the curious effect of feeling like it was both puckering and drying out your mouth. I deemed it “interesting” but a “once is enough” kind of fruit, but the almighty Wikipedia says it is also used to make som tam (which I happen to love), so who knows.

Then we saw this:

I had seen this fruit around town before, but had hitherto avoided them as they are also covered in short, brown needles. If there’s anything I learned from “petting” a cactus of my mother’s (what can I say, it looked furry), it is: Don’t. Touch. Short. Brown. Needles.

Fortunately, my mother-in-law has no such compunction and I am glad of it because this fruit turned out to be delicious. Known as the “Snake Fruit,” it was also sweet and tart, but nicely balanced. Its smell reminds me of the jackfruit, but the texture and consistency of its flesh is closer to the loquat. After breaking off the tip (and being held in a paper napkin by me), it is rather easy to peel as the rind is dry and brittle. Inside are 1-3 lobes, each containing a rather large seed. Definitely one to devour.

My 38th week of pregnancy has also been notable for:

Because the baby has done such a good job waiting for her Farmor, I’m hoping she’ll do the same for my sister, who arrives on Thursday. Hooray!