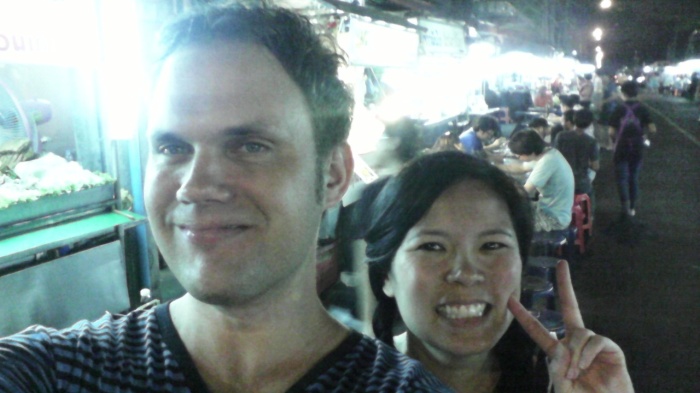 Bjorn and I in happier, second trimester times.

My second trimester had been going great, comparatively.

I was no longer on bed rest, I had loads more energy, I could swim/run clumsily in the pool and my appetite had come roaring back. True, I sometimes have indigestion but I will take that over nausea any day.

I had a doctor’s appointment about  3 weeks ago and the check-up had gone great: baby moved around, heartbeat strong, on target size-wise. The only issue was I didn’t seem to be gaining enough weight (I know, right?Who woulda thunk that would’ve been my problem??) So we scheduled another appointment, just because “I” was concerned.

About a week ago, I was back in the doctor’s office. I had barely managed to gain half a kilo (or about a pound) in 2 weeks, when pregnant women should be gaining about 1 pound a week. I was feeling really bummed because I had vigorously upped my eating schedule and was eating about every 2 hours. However, the baby is apparently a NEWSTART champion and I had been forced into a near-vegan diet.

The doctor told me I needed more animal protein and suggested I eat 6(!) eggs a day (2 whole eggs, 4 egg whites). I was still mulling this over when I mentioned casually, “Oh, I had some brown discharge.”

I didn’t think it was a big deal. Some very slight amounts that hadn’t been that dark had shown up only twice over the course of 2 days. There had been no cramping. I felt great, full of energy. The doctor didn’t even seem to have heard me the first time I said it, she was so busy scribbling notes and talking to her nurse in Thai.

I repeated myself during a lull, mostly so that I could hear her reassurances. But instead she said the words “brown discharge” softly to herself, and became more alert. At the beginning of the appointment, Bjorn and I had said that we wanted to avoid more ultrasounds as we had been having one every time we saw the doctor. But she said this one was necessary. Now I started to worry.

She spread the cold, cold gel over my belly and began the scan. The baby looked like it was moving. But then she pointed out a dark area beside the baby. She said it looked like there was blood behind the placenta, that a part of it had become detached from the uterus. Now I was the cold one.

She prescribed 200 mg Utrogestan capsules, a hormone suppository for the next 2 weeks. As is my wont, I immediately started Googling it when I got home, but was disconcerted to find very little information about its use during the second trimester. When other mothers asked about it on baby forums, they had either gotten no reply, or sympathetic responses about the no replies. The most helpful information I found was at http://hongkong.asiaxpat.com.

I wasn’t technically put on bed rest, but I had to stop exercising. She said the good news was the bleeding had stopped on its own. But she was acting odd: her movements more swift, her sentences jerky. I felt like she wasn’t telling me something. Now I felt sick.

I cried in the hallway outside her office as soon as we were done. And, as a person of Christian faith, I did what naturally comes next: rail against God.

“Why, why is this happening to me?” I wailed in my head. “Why are You letting this happen to me??”

Then came the guilt. What had I been doing wrong? The doctor had told me to move slow, “like a princess,” but sometimes I found myself rushing, and bending at the waist instead of the knees. Plus, I went out at night, sometimes late, as it was much cooler. Or maybe it had been all the exercise. I faithfully worked out at least 3-4 times a week for 30 minutes doing water aerobics, or what Bjorn called “awkward, weird stuff in the pool.”

I kept alternating between questioning God and feeling guilty. Then I realized these questions were just so… stupid.

Bad things like this, and worse, happen to everyone, everyday. Difficult, hard things will continue to happen. There will be questions to which we won’t get the answer. And there are answers that we will not understand.

What I should have been asking myself is not “Why?” but, “What am I supposed to learn from this?”

So what to ask God? I don’t know. I just plead: Dear God, please take care of her. And me.

10 thoughts on “Why does pregnancy suck so much?”